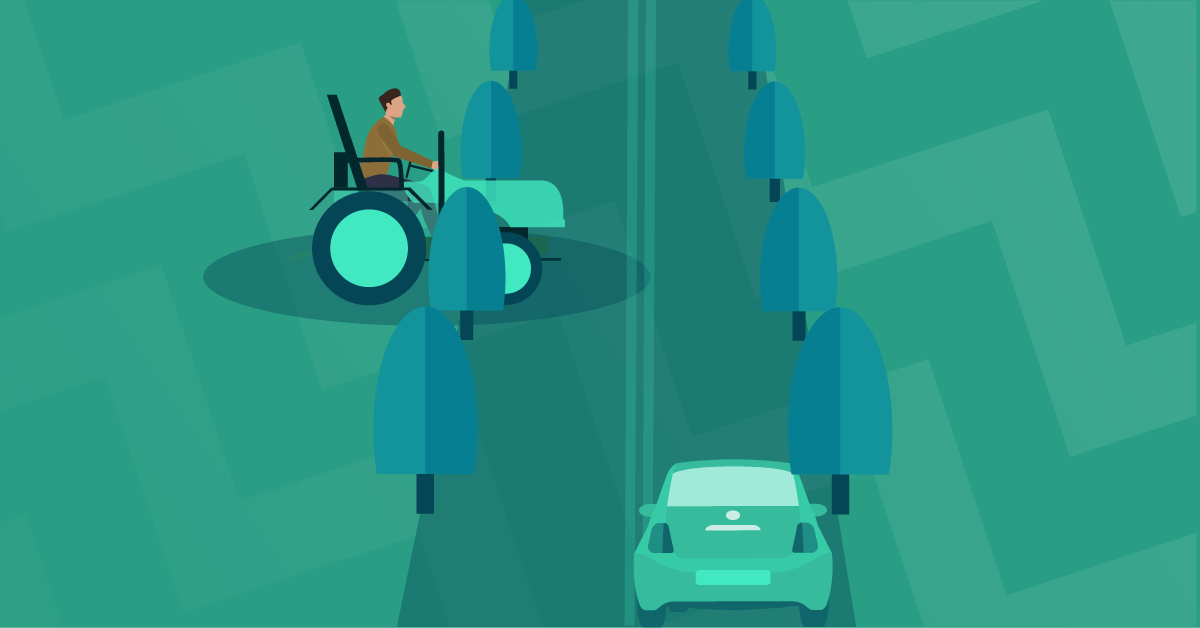 Hazard perception test tips One of the very first hurdles in each learner drivers journey is the infamous hazard perception test. It was added in 2002 as the second half of the UK’s driving theory test, and it’s been challenging learners ever since. By now you’ll…

One of the very first hurdles in each learner drivers journey is the infamous hazard perception test. It was added in 2002 as the second half of the UK’s driving theory test, and it’s been challenging learners ever since.

By now you’ll know that you need to pass it before you’re allowed to book your practical test. So grab a notepad and pen because we’ve got all the hazard perception test tips you’ll need.

What is a hazard perception test?

Preparing for your theory test can be pretty nerve-wracking, so we recommend taking it step-by-step and not rushing through. The hazard perception test is the final part of your theory test. It’s a video section that’s there to test how well you can spot hazards on and around the road. It’s designed to make sure you can pay attention to your surroundings and keep other road users safe, all while being in control of a car.

You’ll be shown 14 videos in this section. Every video will include a hazard and one of the videos will include two hazards. TOP TIP: You won’t be told which video has two hazards to look out for though, so keep your eyes peeled!

Here’s how the test works:

First things first, before going into your test, you’ll have to understand the difference between potential and developing hazards. Your driving instructor will teach you to look out for potential hazards in your driving lessons, but you won’t score any points for clicking them in your perception test.

For example, you might want to click on a pedestrian before they look as though they’re going to walk onto the road. But it won’t be classed as a developing hazard until they’re are actually making their move, so you wouldn’t score any points for that click.

It might sound confusing at first, but you’ll get the hang of it. Here’s a few things which will be classed as a developing hazard in the test:

Spotting any of these will earn you points, getting you that bit closer to passing the entire test.

The hazard perception test pass mark is 44 out of a total of 75 points. Even if you get full marks in the multiple choice, you’ll fail your whole test if you fail your hazard perception. But don’t panic, getting the practice in will help make sure you pass first time.

How does the scoring system work on the hazard perception test?

Five points are on offer for each hazard, and the quicker you are, the higher you’ll score. Try to click the mouse as soon as you see a hazard starting to develop. Each hazard will move in five stages and this will be your scoring window. So managing to click in stage one will give you full house of five points. 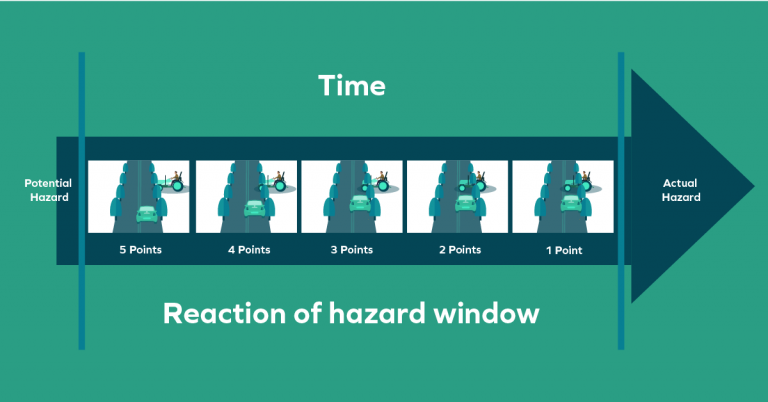 You shouldn’t click more than 5 – 10 times on one video clip. So only click when you see the hazard. You could wait and click a second after you spot it, to make sure you’re definitely in the marking zone. But if you’re certain, click straight away.

Fitting in your hazard perception test practice can take up a bit of time, but we’ve got a few top tips that should help you out.

The first on our list is getting yourself a learning to drive app, as they’re super easy to use whenever you feel like it and should have all the up-to-date information.

Veygo Learn (link) is our all-in-one learner app where you can work your way through each topic at your own pace. It’s also handy for things like tracking your progress as you go, so you can make sure you’re working in good speed for your upcoming test. If you want to have a shop around, here’s our list of the best theory test apps out there.

There’s no better way to build up those hazard perception skills than practicing the actual test itself. The mock test is also included in our app, as it’s a great way of avoiding any nasty surprises on the day. You’ll get see how long the videos are and what sort of hazards could come up. There isn’t really a downside to completing one of these, and we’d highly recommend.

For some of us, booking the theory test and having a date to work towards is a perfect motivator. If this is you, count is as one of the steps you have to take when preparing to learn to drive. Having the goal in mind should hopefully mean you won’t leave your practice until the last minute, or do it too soon and forget everything you’ve learned.

As we’ve said, you can’t click more than 5 – 10 times in one clip. Keep in mind though, clicking the screen over and over again will be picked up by the computer. If it thinks you might be cheating, you’ll be shown a message at the end of the video about irregular clicking. You’ll then score zero points for that video clip, so putting in the work before the day should mean you won’t have to risk it and lose points.

Here’s another recap for you; you should only click on a hazard when you can see it developing. Clicking on a potential hazard won’t score you any points and will use up some of your clicks. This is why doing some practice tests on your learning to drive app is a great idea. You’ll get used to spotting when hazards start, and when you should click to score as many points as possible.

There are no rules to say you can’t start your driving lessons before you’ve passed your theory test, and some instructors will even say that navigating the roads for yourself could give you a better chance of passing your theory. We could help you get out on the roads with our learner driver insurance, getting you one step closer to having your full driver’s license.