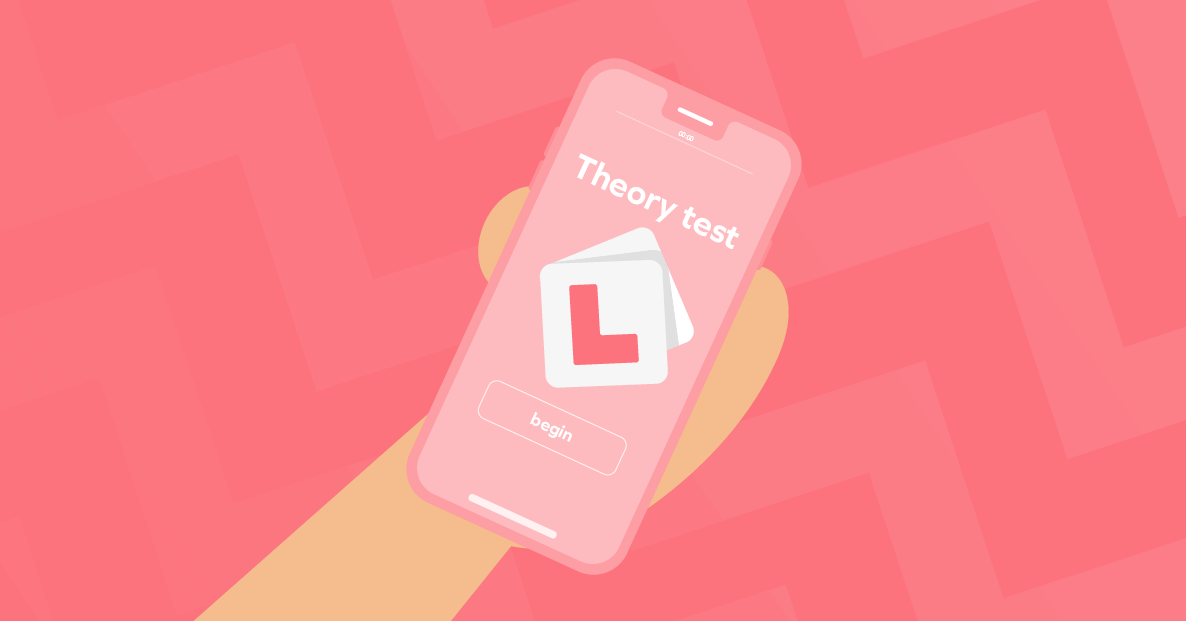 Revising for your theory test doesn’t need to be boring. There are heaps of apps available to make the process fun and enjoyable. We’ve put together a list of the Top 5 Theory test Apps to help get you started!

So, it’s time to crack on with your 20 hours of revision (as suggested by the DVSA) for the theory test. This doesn’t have to be as mind-numbing as it sounds though. With the help of some of the best theory test apps, revision can be much more fun than memorising the Highway Code front to back.

It’s well worth taking the time out to do so. Between April 2020 and March 2021, the average theory test pass rate was 55.7% – and that’s not just first-timers. It costs another £23 to retake, plus your licence gets a little further away. So it’s smart to get lots of practice in.

There are tons of apps out there to help you to revise for your theory test. They can be useful for anything from learning the signs to taking mock tests. This could be a cost-effective way of revising as many apps have free versions or trial periods, so you can rinse them before having to with the option of upgrading to the full paid version. Bonus! Here’s our round up of the top 5 best theory test apps.

This DVSA theory test app has pretty much everything you need to prepare yourself for your theory test. As it’s the official kit, you know you can trust it to be accurate. And that’s why it’s our #1. It contains every single theory test question, an official copy of the Highway Code, and 20 realistic hazard perception tests. The app is £4.99, with no free version available, but it’s definitely worth it.

Pros: It’s official – so it’s going to be accurate! It has everything you need to prepare yourself, and the tests are just like the real deal.

Cons: As there’s no free version to try, you need to pay £4.99 without testing it first.

The maker of this app makes the bold claim that 9 out of 10 learners pass their theory test using nothing more than this app. It’s also the best-selling theory test app nationwide. Seems like a good investment. This app may seem a little bit out-dated at first glance, its graphics aren’t exactly easy on the eye and the layout is a bit basic. But don’t let that put you off!

The free version has nearly everything you need to get ready for your theory test. It’s got the entire Highway Code, separated into categories, for revision. It’s also got realistic practice Theory tests, which has the same features as the real deal. For £4.99, you can download the full app to unlock more questions, try mock test hazard perceptions tests, and play games & quizzes.

Pros: The free app has a ton of material to help you pass your test – including practice theory questions & hazard perceptions. The paid version has absolutely everything you need to prepare for your test.

Cons: The app isn’t great to look at, and there are occasional pop-up ads.

This is the most expensive on the list, at £5.99 – although you can try two topics for free to see if you like the look of the app, which you probably will, as it’s pretty slick.

If you shell out for it, there are a whopping 80 DVSA-licensed and custom-made hazard perception videos. What you’re paying for is the most comprehensive set of questions and videos out there.

Pros: It’s got all DVSA-licensed materials, and then some. There’s also a voiceover function, so you can listen to the questions.

This  driving test theory app is super simple and runs well. It has different levels of questions, so you can start with the easy ones and work your way up until you’re ready to take a practice test. The best thing about the app is the challenge bank. If you get a question wrong, it goes into the challenge bank, so you can work on your weaker spots.

Pros: There’s not an overwhelming amount of information. The stages of difficulty set up is great for those just starting out. The challenge bank means that you can nail those tougher questions. But most of all, it’s free!

Cons: There’s no hazard perception practice. This app also can’t stand on its own as there’s no Highway Code element to study, only practice questions.

Need help working out the difference between the ‘no waiting’ sign and the ‘no stopping’ sign? The UK Road Signs app is for you! The app has every road sign you could possibly need to know, separated into categories for easy learning. There’s also a quiz section to test your knowledge.

Pros: It’s great for learning your road signs alongside other theory practice.

Cons: ADS! An ad pops up every time you click on a new category, which can be a little bit annoying. You can close them immediately, though.

Brain Hack’s Theory Test app has a nice, simple layout. It’s got a lot of practice questions separated into categories. There are plenty of different categories, meaning that you can really drill down on areas you’re finding difficult. You can also take a mock test when you feel ready.

We love the app’s explanations – if you say “I don’t know” or get the question wrong, it gives you a full explanation. But what makes the app truly unique is because it uses The Spacing Effect. For an extra 99p, it incorporates a learning method– that it will show you questions on just the right day, to make sure they go into your memory. That’s where the ‘brain hack’ comes in.

Pros: The app’s clever use of The Spacing Effect, and the notifications it sends you, make sure you’re learning in a way that’s more likely to resonate in your long-term memory.

Cons: Android only! Also, The mock test isn’t entirely realistic, as– it’s not timed., And it’s interrupted by ads every now and again. Bear in mind that 2018 is the only version available.

Revising for your theory test

If you use any of these, let us know what you think is the best theory test app! Alongside these great driving theory test apps, we’ve got some free guides and resources that you might find helpful:

Once you’ve passed your theory test…it’s time to start thinking about the practical! Practicing outside of your lessons is a great way to help speed up the process. We might be able to help you out with learner driver insurance from 2 hours to 180 days.