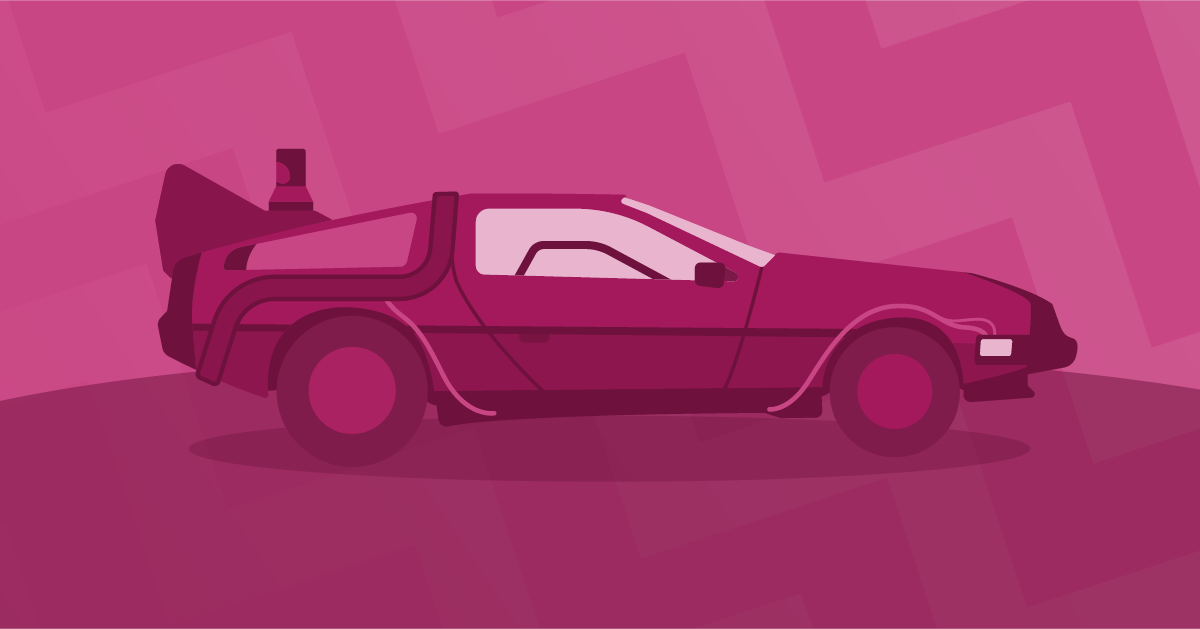 Back to the Future Day: How much would it cost to insure the DeLorean?

To celebrate Back to the Future day, we’ve worked out how much it would cost Marty McFly to borrow Doc’s time travelling DeLorean for one week.

Insurance, and motoring in general, can often be expensive for a 17 year old. Temporary car insurance is a great way to get more driving experience and prove that you’re a safe driver. However, borrowing your friend’s DeLorean to time travel is apparently not a good way to reduce your premiums.

At first, it makes sense for Marty to use Veygo temporary car insurance to borrow Doc’s Delorean for a week. Marty’s only 17 years old and doesn’t own his own car. Marty does, however, have an older and more experienced friend, Doc, with a DeLorean he’s happy to share. Doc has always wanted a co-pilot to share the driving with through the space-time continuum. In 2018, Marty would even benefit from being priced as a 50 year old man, instead of a 17 year old.

Marty has had one accident where he crashed the DeLorean into a barn during an escapade with Doc. Veygo’s Claims team has estimated this incident cost around £5,500 in car parts alone to repair! Even standard car parts in a DeLorean are expensive, as most of them need to be imported from Texas. We’d also struggle to find a Doc-approved garage capable of completing the work on the classic car/time machine. BUT as this incident technically happened in 1955, Marty won’t have to report this as a claim that happened in the last 3 years – phew!

The car is undeniably a cult classic, but the DeLorean doesn’t help Marty in his quest to get cheaper insurance. The DeLorean is now considered a Classic Car, despite only being 2 years old and valued at £51,290 in 1985. In 201,  the DeLorean has a more modest (but still impressive!) valuation between £36,000-£40,000. A 50 year old man like Marty would ordinarily be looking at a quote of £34.59 for a week’s cover on a standard DeLorean. Not bad.

But, this isn’t just a standard DeLorean! Whilst the car itself isn’t too expensive, the technology inside that enables it to time travel is almost definitely irreplaceable. We certainly wouldn’t be able to source a Flux capacitor at any of our approved garages. Our pricing team estimate that the Delorean’s tech alone would be valued at over one trillion pounds! Instead, we would only insure the car itself and not pay out on damages to the time machine itself. We aren’t certain how happy Doc will be with that prospect…

Worse still, the Plutonium Nuclear Reactor in the DeLorean produces 1.21 gigawatts of energy, which is roughly equivalent to the energy of 300kg in TnT every second. Combined with the nuclear material in the reactor, the surrounding area would become irradiated in the event of a crash. This could cause a massive explosion, meaning that the danger this car poses to the public is substantial. The level of danger increases the premium to £1,729,500 – Great Scott!

Plus, travelling through time is risky! Previous decades such as the 1970s and 1980s had far higher accident rates than we do in 2018, and the unknown risk of driving in the future is impossible to imagine. We therefore added a x50 increase to Marty’s premium – who knows how much it will cost to repair the hover vehicles of the future?! Perhaps this could be elaborated on further if Doc could let us borrow the DeLorean to time travel for research…

Until we are able to see into the future, the final price for Marty’s temporary cover would be £77,827,500. It’s so expensive because of the irreplaceable (and potentially unstable) technology, as well as the various dangers associated with time travelling. Even using discount code VEYGOFUTURE to get 10% off a Veygo policy, the price may be a bit heavy for Marty…

If you don’t have a time machine sitting around to help you get the cover you need, check out our temporary car insurance. It’s perfect for borrowing a friend or family member’s car from one hour up to 60 days.

The way we see it, if you’re going to borrow a friend or family member’s car, why not do it with some style?